Not so long ago, The National Enquirer was the bastion of almost joyfully fake news. Then things started getting, well… weird. Now we now find ourselves in a world of “post-truth” —the 2016 Word of the Year according to the Oxford Dictionary—where emotion and ideology are more powerful sculptors of public opinion than facts

Even though fake news isn’t new, more and more Americans are getting their news from social media, not legitimate news sources. And a staggering amount of this news isn’t news at all.  According to Buzzfeed—a popular online source covering digital media and technology—“fake news” outperformed mainstream news in the days leading to Election Day.

By now, most everyone has heard President Trump use the term “fake news.” Yet even this term isn’t exactly true, as he and his administration tend to use the label to mean anything that they don’t agree with versus what is proved to be untrue. While some fake news has a political purpose, most often the goal is to simply get a reader to click or to visit an advertiser. The more inflammatory the headline, the more clicks it often receives and, therefore, the more money is made and the more prominence that article is given. The “click-bait” phenomenon has gotten so bad that even Facebook and Google are trying to get a handle on curtailing it.

This is especially worrisome for kids and teens, who get most of their news from social media feeds and who haven’t developed the “site-smarts” to discern fake news from legitimate sources. This is, in many ways, the defining issue of our time. And it’s vital that today’s students develop the capability to become shrewd consumers of information.

Media comes at us so fast that it often rushes past our ability to gauge its credibility. And viral content is exactly that: a virus that can spread beyond anyone’s ability to contain. This means that both kids and adults alike need to view news as an editor would: as fault-finders constantly questioning the validity of the information presented.

This chart by patent attorney Vanessa Otero shows where popular news media fall in terms of skew and quality of reporting, helping students to be better aware of their sources.

As a response to the fake news phenomenon, the State of California has already drafted legislation requiring “civic online reasoning” be added to curriculum as a response to a troubling study conducted by the Stanford History Education Group showing that young people are particularly susceptible to fake news stories.

The Stanford researchers studied middle school, high school and college students in 12 states and found they had difficulty distinguishing ads from articles and fake accounts from real ones. More than 80% of middle schoolers assumed that sponsored content was real news. High school students accepted photographs as fact. Most college students didn’t question the potential bias behind tweets from activist groups, or identify the difference between a mainstream and fringe source.

But it’s a challenge to wean children off fake news when their parents are so easily fooled.  Even if a story seems false, if it fits the reader’s particular ideology, then it’s often filed away as true regardless. This is, perhaps, the scariest part of all of this: even if something turns out not to be true, it is quickly dismissed as the lie has already been accepted.

So it’s up to the educator, in many ways, to create media savvy students. And questioning what you read begins with questions. How believable is the story? If it seems fake, it often is. What do you know about the source? A little research can go a long way.

Other tips for helping kids to sniff out falsehoods include:

When in Doubt, Head for the Library

Chicago librarian Kylie Peters is on the front lines of the war against fake news.

“Librarians are the original search engine,” says Peters. “People think they don’t need libraries because of Google. In fact, they need us more than ever to help them combat information overload, and sort and evaluate the current glut of information.”

Here are a few of her tips for helping students navigate a world of falsity.

Peters also suggests that students test their media manipulation skills by Googling the phrase “Save the Pacific Northwest Tree Octopus” and clicking on the site that comes up first. This site was specifically designed to teach students digital literacy and has some built-in clues to help identify false information. 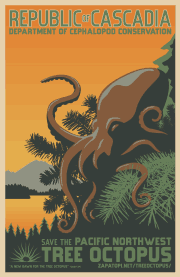 And Peters advises that if a student feels overwhelmed, that they can always seek out a librarian to help them with essential media literacy skills.

Other tools for combating fake new include these Google lesson plans for evaluating the credibility of sources and an irreverent syllabus called Calling Bullshit in the Age of Big Data created by two University of Washington professors tackling critical thinking in regards to “data and models that constitute evidence in the social and natural sciences.”

The News is Fake but the Threat is Real

Ignorance and propaganda are a threat to the American way of life as democracy depends on the acknowledgment of facts to help steer our government through a sea of opinions and self-interests. Even more so, fake news can strip away faith in our institutions, effectively making them useless.

It’s up to the educational system to help create a more savvy generation of citizens to lead our country forward. This entails not only the ability to more accurately sift through fact and fiction, but a better understanding of constitutional democracy and the structure of government.

Perhaps a push for media literacy and more comprehensive civics education could help mend our fractured political landscape. And while creating a civics curriculum can be a touchy thing—walking a tightrope to avoid the potential ire of parents—it is essential in giving students a unifying foundation and hope for the future. This skill would also offer students strong examples of how powerful “true” journalism can be in revealing societal ills, thus encouraging solutions.

As Chris Berdik recently reported in Slate, preliminary research suggests that students who receive media literacy training are better able than other students to evaluate the accuracy of political claims and distinguish advertising, entertainment, and advocacy from news.

With social media’s popularity as a news source, it’s more important than ever that we equip students with the media literacy and critical thinking skills to distinguish fact from fiction. Admittedly, it’s a challenging task. But our civil society depends on a well-informed citizenry— including tomorrow’s voters—that have the tools to make up their own minds. As Thomas Jefferson (purportedly—I’ll have to check three sources) said: “An ignorant people never remain a free people.”

Check out these resources for incorporating “truth-seeking” into your classroom: